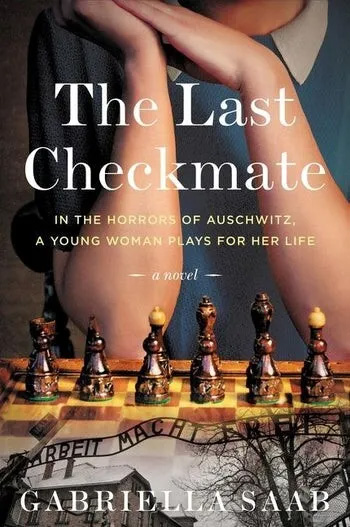 Gabriella Saab’s The Last Checkmate opens in April 1945. An escaped prisoner from Auschwitz, Maria Florkowska, returns to the cold camp to battle the camp’s former deputy in a final chess match. The first few lines immediately set the tone of the novel: “Three months ago, I escaped the prison that held my body, but I haven’t found freedom from the one that holds my soul. It’s as if I never shed the blue-and-gray-striped uniform or set foot beyond the electrified barbed-wire fences. The liberation I seek requires escape of a different sort, one I can achieve only now that I’ve returned.” Despite the brutality of the setting, the main character, Maria, is able to relight the flicker of hope burning in her chest.

The Last Checkmate is not organized in a typical order or fashion. The story jumps between Maria as a fourteen-year-old starting to work in the resistance against Nazis, the time she spent in Auschwitz, and months after her escape when she meets back up with the former camp deputy, Karl Fritzsch, to play one final chess match. The story doesn’t follow chronological order until the last one hundred pages, but the time shifts are never jarring or confusing. The jumps to Maria and Fritzsch’s chess game add tension and foreshadow the next chapter, while the cuts to Maria’s time in Auschwitz make the reader despise Fritzsch even more. The inclusion of the date and setting of each chapter under the chapter title helps readers keep track of the story’s timeline.

Unexpected twists and turns throughout the novel create tension and surprise. They kept me guessing and made me audibly gasp. From surprise character returns to the final moments of the last chess match between Maria and Fritzsch, I never knew what was coming. The several twists throughout the novel not only made the story a page-turner but offered a tiny taste of what it was like for prisoners of concentration camps like Auschwitz. Prisoners of these camps, like Maria, had to constantly be on edge and on guard because they had no control over what would be coming their way.

This novel is chock-full of powerful and empowering female characters, including Maria. All the women in this story go through devastating life events like losing family members and friends, enduring torture, and surviving various types of assault, but none of the women let these events break them. Instead, they use these tragedies and hardships as fuel for their fire to survive Auschwitz and to aid the resistance against the Nazis. Maria loses her entire family because she was caught on a resistance mission. This guilt almost destroys her, but because of the kindness of Father Kolbe and the insistence of Hania, the only other woman in Auschwitz, Maria is able to fight to get out and to live.

The characters in this story are so incredibly well written, whether they are main characters that appear in the story multiple times or side characters that we only meet once. One of the characters that stood out to me is Father Kolbe, who is a shining light of love and hope in the heavy darkness of Auschwitz. By giving Maria his rosary, he can continue to give hope even after his death. Despite such shining lights, there are some characters that I could not stand, but in the best way possible for a novel. With each interaction between Maria and Fritsch, my hatred and disgust for the camp deputy only grew. Fritsch’s cruelty, whether it was mental or physical abuse, never felt like it was out of character. With each of his cruelties, I could sense that he had a goal in mind, which made him even more sinister.

An interesting aspect of The Last Checkmate is that many of the characters are based on real people who lived during the 1940s. Saab is not claiming that her novel is 100 percent historically accurate nor an accurate retelling of these people’s lives; however, she uses these historical figures’ stories as guidance for her interpretation of these characters and their lives. Saab includes a section in the back of the novel that details the historical figures’ real lives. After reading this section of the novel, it is very clear to me why these figures were characterized in the ways they were in the fictional story. This section was very informative and added another layer to the novel.

Though this book does cover very heavy topics and includes a lot of dark details regarding concentration camps and their practices, it was a delight to read. The characters are well written, the setting is clear, and the tone is one of hope. The message of this novel is that no matter how long and how dark the tunnel is, there is always a light at the end.

Bri Carnley is a recent graduate of the University of Alabama at Birmingham. She is currently working at UAB’s University Writing Center as the program administrator and attempts to write poems in her free time.