The Gulf South: An Anthology of Environmental Writing 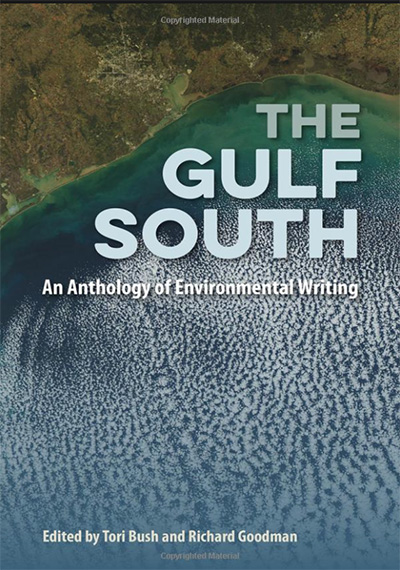 I lived on Galveston Island, Texas, for a couple of years in the 1990s. On trips to and from Galveston to Alabama, I always looked forward to the crossing of the Atchafalaya Basin on an eighteen-mile stretch of I-10 between Baton Rouge and Lafayette, Louisiana. I would often schedule my travel so that I would hit the Atchafalaya at sunrise or sunset, when its magnificence was most apparent at 70 mph.

I was vaguely aware that, if nature had been allowed to take its course, the Atchafalaya would have been the southernmost course of the Mississippi River by the time I had come to know it. That knowledge didn’t fully register, however, until I read the ambitious anthology, The Gulf South: An Anthology of Environmental Writing, edited by Tori Bush and Richard Goodman, scholars at Louisiana State University and the University of New Orleans respectively.

The Gulf South is a savory gumbo of selections by forty authors, dating from 1888 to 2017. It includes fiction and nonfiction, folklore, poetry, journalism and science writing, memoir, graphic nonfiction, and a Florida Indian Tribe’s 1978 “Petition for Recognition.” The compilation includes well-known writers, including William Faulkner, Joy Harjo, Zora Neale Hurston, John Muir, Marjorie Kinnan Rawlings, Natasha Trethewey, Jesmyn Ward, and E.O. Wilson along with selections from writers who are lesser-known. The subject matter rambles across the region, but specific touchstones include the Atchafalaya, the Everglades, the Mississippi River flood of 1927, Hurricane Katrina and its aftermath, and the BP Oil Spill of 2010.

In an introductory essay, the editors state that “We are now living in the first geological era in the history of the Earth when members of a species – humans – have significantly affected ecological systems in a potentially irreparable manner.” Many of the selections chronicle the attempts of humankind to “tame” the rivers, coastlines, and the Gulf itself and to gird them to serve short-term purposes and perceived needs. Jack E. Davis, in the concluding excerpt from The Gulf: The Making of an American Sea, sums up the attitude of the early Spaniards who began to colonize the region: “People who had failed to exploit their surrounding abundance for commercial purposes were artless and lazy, in the judgment of the Spaniards.” “He should have stayed home,” writes poet Joy Harjo, about Spanish explorer Hernando De Soto, whose body lies somewhere in the Mississippi River. In contrast, Roger Emile Stouff, a member of the Chitimacha Tribe, writes poignantly of fishing a Louisiana canal at dusk: “I can almost see all my relations since before there was time.”

It is a daunting task to read The Gulf South from cover to cover. The book is sometimes overwhelming in its detail about “one of the front lines of climate change in the United States.” It is essential, however, in its consideration of Southern ecology, legacy, and tradition. The book is arranged chronologically by year of publication, but a helpful appendix groups the various selections by category and makes the text more navigable for individual interests and selective reading; for example, Faulkner’s “Old Man,” about the 1927 flood, is listed under “Inundations.”

Richard M. Mizelle Jr. pinpoints one of the themes that dominates the anthology in an excerpt from Backwater Blues, which deals with the 1927 flood and the government’s decision to destroy levees downriver to protect New Orleans. He addresses “the power certain groups held over other groups in the shaping and creation of suffering.” Justin Nobel, in “The Louisiana Environmental Apocalypse Road Trip,” warns “… do not even think about using the word climate change, because it is not about that, it is about running a toxic open-air chemistry experiment next to human beings, and their backyards and schools and churches.” In John McPhee’s brilliant long essay, “Atchafalaya,” about the Mississippi River’s natural tendency to jump its banks and radically change course, he notes “Nature, in this place, had become an enemy of the state,” and details the human arrogance of trying to restrict the river. An excerpt from David Gessner’s The Tarball Chronicles describes a walk through a marsh near Mobile, Alabama, examining the more subtle impacts of the BP oil spill and its lasting impact on bird migrations.

It’s not all grim, however. Nineteenth century essays by Catherine Cole and Lafcadio Hearn provide longing narratives about Last Island on the Louisiana coast – an island that no longer exists. Hearn writes, “amid their eternal strife the islands … change shape, more slowly, but not less fantastically than the clouds of heaven.” Marjorie Stoneman Douglas’s The Everglades: River of Grass, from 1947, is seminal writing on the scope and importance of the Everglades. Several essays chronicle home-grown environmental activism throughout the region. An excerpt from Edward O. Wilson’s Half-Earth: Our Planet’s Fight for Life, profiles MC Davis, a wealthy Florida entrepreneur who conceives and executes a project to plant a million longleaf pine seedlings in a continuous strip of natural environment along the Florida panhandle, eventually stretching into Alabama and Mississippi. Such projects make Wilson’s ambitious “Half-Earth” proposal seem less far-fetched and ultimately achievable. If I had not read the excerpt from Cynthia Barnett’s Mirage: Florida and the Vanishing Water of the Eastern U.S., I would not have been inspired to seek out the stunning black-and-white nature photography of Clyde Butcher.

The Gulf South combines dense and challenging texts with shorter, more lyrical passages to capture a sense of what the Gulf South provides in terms of natural, environmental, and cultural necessity, and what will be lost if it isn’t properly sustained and protected. Environmental activist Oliver Houck, in his 2010 essay, “Down on the Batture,” describes his hopeful search for the possibly extinct ivory-billed woodpecker around the Pearl River basin, imploring the bird to “Just give us another chance.” It is a plea that applies to so many elements of this essential part of our national identity as we come to grips with the costs of centuries of neglect, abuse, and misuse along our Gulf.