Don’t Blow Yourself Up

Don’t Blow Yourself Up: The Further True Adventures and Travails of the Rocket Boy of October Sky
By Homer Hickam
Post Hill Press, 2021
Hardcover: $27.00
Genre: Memoir
By Edward Journey 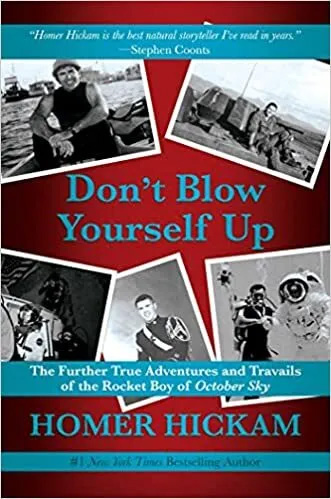 I suppose author Homer Hickam has earned a degree of braggadocio after a life of risk and accomplishment, and it is on full display in his memoir, Don’t Blow Yourself Up: The Further True Adventures and Travails of the Rocket Boy of October Sky. Hickam is, of course, the author of the best-selling self-described “classic” Rocket Boys and the principal character in October Sky, the enduringly popular film adaptation of that book about a group of teenagers who, spearheaded by “Sonny” Hickam, become obsessed with rockets after the Russians launch Sputnik in 1957. Don’t Blow Yourself Up is the continuation of Hickam’s story, beginning around the time of his high school graduation.

After growing up in the coal mining town of Coalsburg, West Virginia, Hickam credits “kismet” with the trajectory of his life in “Blacksburg and Utah and Vietnam and Gunaja and Germany and NASA and Japan and all the other things and places and people later.” His life story lends credence to the kismet theory. After being turned down for the Air Force Academy, he neglects to apply for college; thanks to his mother’s intervention, he is admitted to Virginia Tech in Blacksburg, where he admittedly muddles through while becoming known as “Flash Hickam, Everybody’s Favorite Cadet.” He still believes that his brief encounter in 1960 with then-Senator John F. Kennedy, in which Hickam asked a question about going to the moon, energized the soon-to-be President and “in part” helped him to win the election. His time at Virginia Tech affords him the opportunity to once again break out his rocket-building skills as he engineers the construction of a Civil War-style cannon as a mascot for the football team. “The Skipper” cannon continues to be a treasured part of the Virginia Tech legacy.

A motif that began in Rocket Boys and runs throughout Don’t Blow Yourself Up is the author’s complicated relationship with his parents, especially his proud coal miner father. Hickam recounts jarring instances of thoughtlessness toward his parents that cause him to feel remorse, but he’s never quite able to say the words that will make it right. He gives the impression that this new book is, in part, an effort to atone for those moments and, once again, to try to make his parents, who have both passed away, proud.

After college, Hickam, determined not to follow generations of his male ancestors into the West Virginia coal mines, goes through the brutal hazing and harsh treatment of Engineering Officer Candidate School. During a training assignment in Utah, he takes writing classes at Brigham Young University, falls for a Mormon girl, and buys a Porsche to impress her! Still, her family’s concerns about her involvement with a non-Mormon lead to the end of that relationship. Hickam eventually finds himself in Vietnam. His descriptions of life in wartime Vietnam rival the most brutal depictions in Vietnam-era movies and trace his growing disillusionment with that ill-fated entanglement. His time in Vietnam involves a pinball-like existence in which his MacGyveresque machinations and ingenuity serve him well as he frequently outsmarts his commanding officers in “a combat zone where nothing was normal except its abnormality.”

After Vietnam, a still somewhat aimless Hickam takes an Army Civilian job at Redstone Arsenal in Huntsville. On assignment in Germany, he creates a “pioneering hub in office computerization.” He takes a deep dive into scuba while in Huntsville, is licensed as a scuba instructor, and begins to be regularly published. As he puts it, he lives a “triple life” in the 1970s and 80s as a scuba instructor, writer, and engineer. His scuba adventures take him to the waters off North Carolina and the Honduran island of Guanaja, where he searches for sunken German submarines. Along the way, he eventually sells that Porsche to buy a beach on Guanaja.

Shifting from an Army job at Redstone Arsenal to a NASA position with the Spacelab Program Office in Huntsville’s Marshall Space Flight Center, Hickam finds himself in a place that is ideally suited to his interests and accumulated skillsets. Throughout it all, he continues to advocate for a return to the moon. The scuba expertise makes him a natural as a diver at the Center’s Neutral Buoyancy Simulator, and he eventually designs a Neutral Buoyancy Simulator for NASA’s Space Camp. During this time, on a dive in Central America, Hickam flirts with death from decompression sickness (“the bends”) in an area remote from appropriate medical care but is able to jury-rig a way to get pure oxygen.

My favorite chapters in Hickam’s memoir are those that deal with his time working as a NASA representative with Japan’s National Space Development Agency. These chapters resonate because the author drops some of his bravado and shows a more vulnerable side. This is most clearly illustrated as he has to finesse a possible international incident when an American astronaut is rude during a training session presentation by a revered Japanese scientist. Hickam deals with the inevitable culture clashes that occur during that assignment, aided by his enigmatic Japanese assistant/translator, Hoshiko, and her matter-of-fact assessments of delicate situations. The intriguing bond that Hickam and Hoshiko develop is one of the book’s most pleasing developments. When Homer’s deployment in Japan is at an end, he has become a sensei – “teacher” – to his Japanese colleagues.

Fans of Rocket Boys and October Sky will find much to enjoy in the chapters in which Hickam chronicles the genesis of Rocket Boys from a 1995 article in Air & Space magazine to the making of the movie. In the final paragraphs of Don’t Blow Yourself Up, Hickam summarizes his life after leaving Coalwood and states, “I am eager to see what comes next.” I’m sure his many fans share that feeling.

Edward Journey, a retired educator and theatre artist, is on the editorial board of Southern Theatre magazine, regularly shares his essays in the online journal “Professional Southerner” (www.professionalsoutherner.com), and has most recently published reviews, papers, and articles in Alabama Writers’ Forum, Arkansas Review, Southern Theatre, and Theatre Symposium.