The Southernization of America

The Southernization of America: A Story of Democracy in the Balance
By Frye Gaillard and Cynthia Tucker
NewSouth Books, 2022
Hardcover, $25.95
Genre: Nonfiction; History
Review by Steve Hubbard 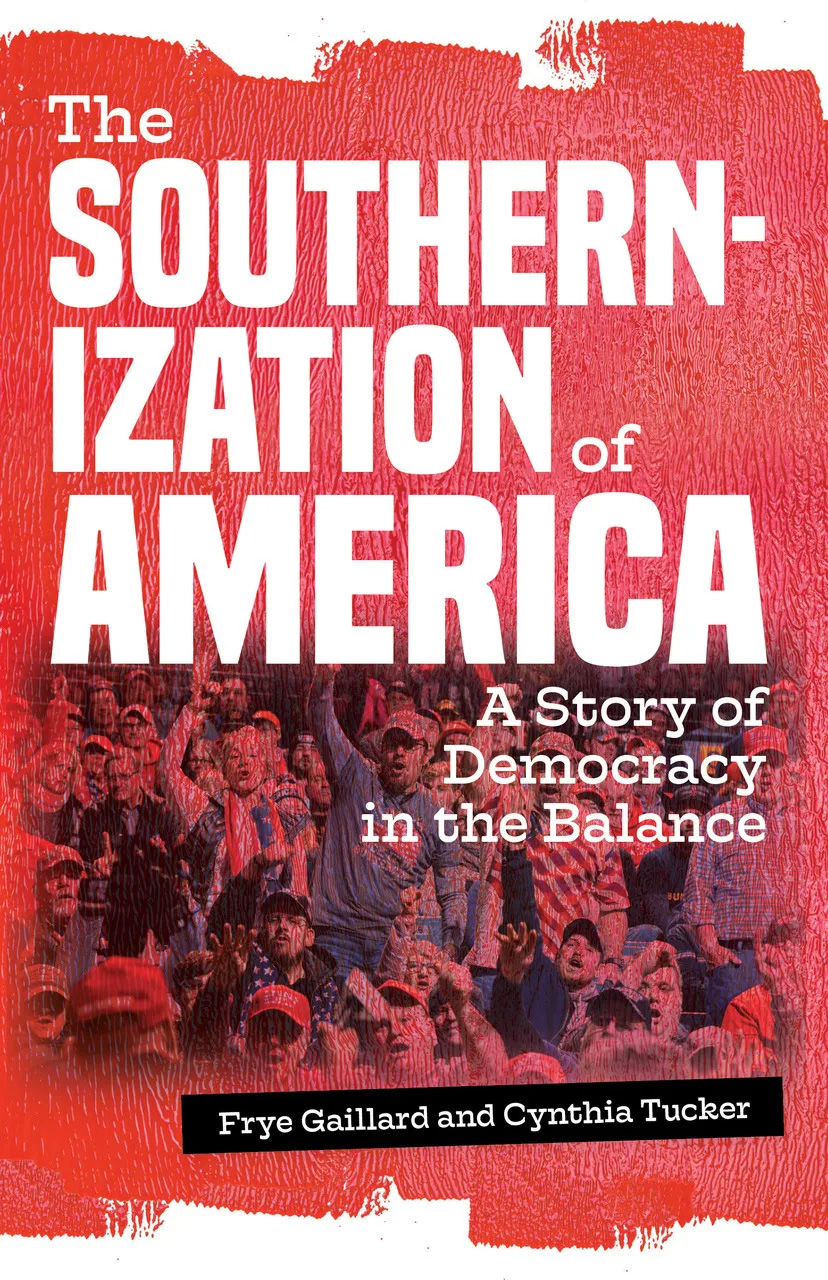 Like many of us who, in our politics, lean liberal to progressive, journalists Frye Gaillard and Cynthia Tucker often felt anxious during the Trump presidency about the future of American democracy. Evidently, so did Randall Williams, Editor-in-Chief of Montgomery-based NewSouth Books. Williams was thinking about a book, The Americanization of Dixie: The Southernization of America, that the late journalist John Egerton published in 1974, shortly before the Watergate investigation forced President Nixon to resign in disgrace. He considered possible connections between Egerton’s observations and reflections and the current moment in our nation’s history. He then approached Gaillard, who has published several books with NewSouth, about writing a sequel to The Americanization of Dixie. Gaillard, liking the idea, invited his University of South Alabama colleague and friend Cynthia Tucker to co-write the book with him (Gaillard is Writer in Residence there, and Tucker is Journalist in Residence). Tucker accepted Gaillard’s invitation, and the project began.

Tucker and Gaillard knew the late John Egerton and think of him and his writings as a significant influence on the work they have done throughout their careers. In The Americanization of Dixie: The Southernization of America, Egerton portrays the South of the early 1970s as indistinct in many ways from other regions. He sees that, thanks to such modern advances as televisions, automobiles, and interstate highways, influence flows both ways: as the South is becoming more like much of the rest of the country, the rest of the country is becoming more like the South. His rather pessimistic assessment is that the South and the other regions of America are mostly exchanging sins rather than virtues. Because of its history of slavery and Jim Crow, the South’s great flaws often relate in some way to race. For Gaillard and Tucker’s project, it would be significant that Gaillard is white and Tucker is African American. Both also grew up in Alabama, he in Mobile, she in Monroeville.

Their book, released in February, borrows for its main title the subtitle of Egerton’s book: The Southernization of America. Their subtitle, A Story of Democracy in the Balance, points to the political and historical focus of the book and suggests the urgency with which Tucker and Gaillard regard their message. Some of the essays were written by Gaillard, some by Tucker, and some by both. The book comes at a time when, in their view, Americans of all political persuasions should be engaged in some serious moral reckoning with the mean-spirited, as well as the noble, aspects of our country’s recent and more distant past.

In the introduction to The Southernization of America: A Story of Democracy in the Balance, Gaillard and Tucker identify the genre of their essays as “more reflections than a narrative history.” Their essay form is loosely chronological, allowing for reflection throughout. To help make sense of our unusual times, they often move between significant moments of the recent past to related moments from earlier eras. This is a flexible method they have developed and perfected individually, with many variations, over their long and distinguished publishing careers.

For several decades, Gaillard was Southern editor of the Charlotte Observer, writing many stories on subjects as varied as Southern religion, recreation, music, and politics. During some of those years, Tucker was a political reporter, based in Washington, for the Atlanta-Journal Constitution and frequently appeared as a commentator on PBS’s News Hour. For seventeen years, she was editorial page editor of the Journal-Constitution. Gaillard’s writing has extended across multiple genres in more than thirty books, including, for example, the memoir Lessons from the Big House: One Family’s Passage through the History of the South; the Civil Rights history Cradle of Freedom: Alabama and the Movement That Changed America, which won the Lillian Smith Book Award; and A Hard Rain: America in the 1960s, Our Decade of Hope, Possibility, and Innocence Lost, which earned the Fitzgerald Prize for Literary Excellence. In 2007, while at the Journal-Constitution, Tucker won the Pulitzer Prize for commentary, and at the 2022 Monroeville Literary Festival, she received the Harper Lee Award for Alabama’s Distinguished Writer.

Gaillard and Tucker’s reflections leave me with a clearer understanding that some of the greatest threats facing American democracy have a long, often complicated history that should be better known. For instance, early in the book, in their essay “The Fragile Promise,” the authors observe that, since the Reagan era, many on the right seem to hold their political views with an “evangelical certainty” that makes even conversations with them about political and cultural issues almost impossible. As someone born in the mid-1950s, who grew up in a white, working-class, mostly Southern Baptist corner of rural west-central Alabama, I can appreciate how, for some people, “religious certainty” may characterize their political views, especially on hot-button issues like abortion.

Of course, religious conviction sometimes undergirds liberal and progressive views, too. But how does strong religious faith become the fanatical devotion of some evangelicals to a figure like Donald Trump?  How can seemingly good Christian people carry signs proclaiming their faith in Jesus while storming the U.S. Capitol? In their jointly written essay “God’s Chosen,” Gaillard and Tucker trace the roots of such blind devotion back to the “legalistic Christianity,” as they call it, of nineteenth and early twentieth-century frontier and rural America. In the white legalistic Christian world of those earlier times, the Bible was read literally. The Bible and men were the authorities in the church and the home. The Bible was used to justify slavery and, after the South’s defeat in the Civil War, white supremacy. In the 1960s, the Rev. Jerry Falwell, Sr., soon to become the best known legalistic Christian of the second half of the twentieth century, would first wade into political waters as an opponent of integration. One would hope that learning about this history would moderate the zeal of some.

In a recent discussion about their book with Debbie Elliott on NPR’s Weekend Edition, Gaillard and Tucker emphasized, in Gaillard’s words, that “the South has always exported contradiction.” Gaillard pointed out specifically the contradiction that Thomas Jefferson, a Virginian, embodied. On the one hand, Jefferson was the principle author of the Declaration of Independence, including all its noble aspirations; on the other hand, he was a slaveholder. Unfortunately, the Declaration’s “self-evident” truth that “all men are created equal” was limited to white men, mostly property owners, yet it became an enduring hope for enslaved people of color, as well as for women regardless of color. Slaves were freed during and immediately after the Civil War; the Thirteenth, Fourteenth, and Fifteenth Amendments were added to the Constitution; but still, equality remained an aspiration for African Americans, especially in the South, until past mid-twentieth century. As Tucker observes in her essay “Biden’s Road to Georgia,” “For all its bluster and all its myths, the U.S. was not a democratic nation until the Voting Rights Act was passed in 1965.” It is that hard-won democracy that Tucker and Gaillard are contending for.

Gaillard and Tucker conclude that, whether we want to be here or not, Americans are at a reckoning point similar to that of white Southerners when federal troops left the South at the end of Reconstruction. To explain their point, they tell of a conversation recorded in Isabel Wilkerson’s book Caste: The Origins of Our Discontent. Upset during the Trump administration by growing inequality for people of color, Wilkerson’s friend, civil rights historian Taylor Branch (a white man) asked Wilkerson (an African American woman), “So the real question would be, . . . if people were given the choice between democracy and whiteness, how many would choose whiteness?” In Gaillard and Tucker’s view, this was the question of moral reckoning at the end of Reconstruction, and it is the question, post-Trump, of our time.

Agree with Tucker and Gaillard, disagree with them, or do some of both, but read this book. While it won’t be the last word, it is a book for going forward, intentionally, as a democracy.

Steve Hubbard taught English from 1984 to 2017 at Lurleen B. Wallace Community College in Andalusia. He currently serves as organist and music director at his church and is running as the Democratic nominee for Alabama House District 92.