Fight Songs: A Story of Love and Sports in a Complicated South 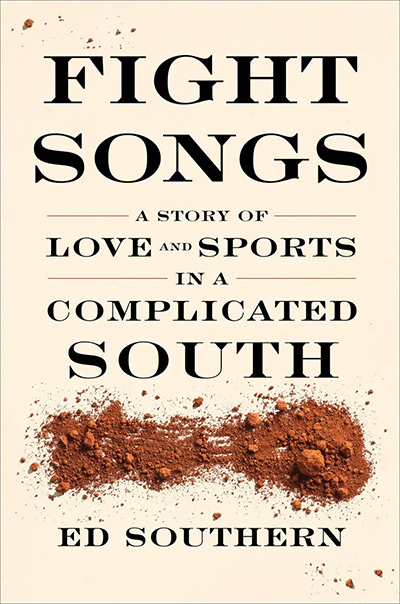 About midway through Fight Songs: A Story of Love and Sports in a Complicated South, Ed Southern states that he’s “working on making [Wake Forest] every Alabama fan’s second-favorite team.” I might be an easy convert; a Baptist-affiliated university whose athletic teams are called the “Demon Deacons” will always garner my attention. Southern, a Wake Forest graduate with strong ongoing ties to his alma mater, tells a compelling story of how he also became a staunch fan of Alabama football. Fight Songs is a challenging must-read for all fans of Southern collegiate athletics with some Atlanta Braves and NASCAR sidetracks thrown in for good measure.

Ed Southern is the North Carolina-born writer and editor of four books and the Executive Director of the North Carolina Writers’ Network. He assures his readers that he “set out to tell a fun little story about sports hate and true love,” but the events of 2020 – “the year of our Lord – our apparently angry Lord,” changed his trajectory. A pandemic, along with racial strife and political divisiveness, turns Fight Songs into a story told with a fan’s fervor examining the history and sociology of the South’s obsession with sports. Southern convincingly connects the evolution of football and sports fanaticism in the South with the violent tradition of the region, while going back to American football’s original roots in “social class, social exclusion, and … nationalism” in the universities of the Northeastern elites. Southern startles the reader with the fact that the football coach at Harvard stated, in 1900, that football is “the expression of strength of the Anglo-Saxon … the dominant spirit of the dominant race …”

Lest this all sounds too heady, be assured that Southern’s approach to the book is entertaining to contemplate and fun to read. He peppers his prose with disarmingly casual vernacular like “fixing to” and “not a lick of sense.”  His array of far-flung interests and information makes Fight Songs a challenge to describe; you just have to be there.

Much of the seminal inspiration for the book comes from a series of unlikely coincidences. Southern, a North Carolinian, born and bred in the tradition of “Tobacco Road” sports and that region’s obsession with college basketball, is partial to college football and his family’s Wake Forest legacy. During a particularly trying time in his life, someone suggests that he read The Last Coach, Allen Barra’s definitive biography of legendary Alabama coach Paul “Bear” Bryant. Bryant’s story inspires and rejuvenates Southern. Soon after, he seems destined to meet Jamie, a woman from Birmingham and an Alabama football fan who is also in the book business. As it turns out, she is the niece of Allen Barra, Bryant’s biographer. This woman will become Southern’s wife. They are married, as he puts it, “just as Alabama football became ‘Alabama again’,” thanks to Nick Saban. His loyalty to Alabama football will be solidified as he remains true to his beloved Wake Forest. The reader will learn much fascinating information about both institutions, including their unlikely connections.

In analyzing the evolution of sports fanaticism in the South, Southern examines the historical contexts in a “particularly hospitable and particularly hostile region, at the same time and in practically equal measure.” As much as he loves college sports (“other than … Duke, of course”), Southern does not hesitate to tackle its contradictions. He examines the positive financial impact of college football on educational institutions and the economies of their communities with a focus on the “Saban Effect” at the University of Alabama, using statistics about enrollment, endowment, scholarships, and income to underscore just how much the string of championships generated at Alabama during Saban’s tenure have benefitted the university and, indeed, the state of Alabama. At the same time, he exposes the contradiction of the plight of NCAA restrictions on the student athletes putting their bodies on the line to make that impact occur. He quotes sports commentator Spencer Hall’s assertion that these student athletes “are neither amateurs nor professionals, effectively moved as undeclared contraband through the United States tax system.”

Southern is game to tackle many issues in a book that might ramble if the author were less masterful and the subject matter less provocative. His disdain for educational institutions “branding” themselves supports the writer John Warner’s assertion that American colleges in the twenty-first century “exist to recruit students, enroll students, collect tuition, and hold class.” Teaching and learning are no longer the mission; Alabama and Wake Forest are no exception.

Fight Song’s far-reaching topics range from a consideration of white “guilt” vs. white “responsibility” to a vivid description of England’s violent, bloody, primal, pre-Lenten “Royal Shrovetide Football Match” – still an annual event in Derbyshire, England. Southern skillfully and convincingly draws historical connections from the 1813 Red Stick massacre during the Creek Indian War, to the 1861 firing on Fort Sumter, to the Alabama victory in the 1926 Rose Bowl (“The Game that Changed the South”). He makes eloquent common-sense observations about NASCAR, Bubba Wallace, and the Confederate flag; about the search for Southern “authenticity,” the Atlanta Braves, and Lewis Grizzard; about barbecue, of course. Yes, that’s there, too.

In summary, then, here’s what happened: The World Health Organization announced a “global pandemic” in March 2020. The Atlantic Coast Conference cancelled its basketball tournament the next day. Ed Southern, in response, went down a deep rabbit hole of contemplation. The “fun little story” he intended to write about college sports allegiances turned into the book Fight Songs. It’s a book to be read, savored, and pondered by anyone who’s ever rooted for their “home team,” however they might define “home.” It’s a book that explores the complexities of being from the American South. At its heart, it’s a paean to Southern sports that also examines the blemishes and dark side. Ed Southern clearly loves his topic – other than Duke, of course.